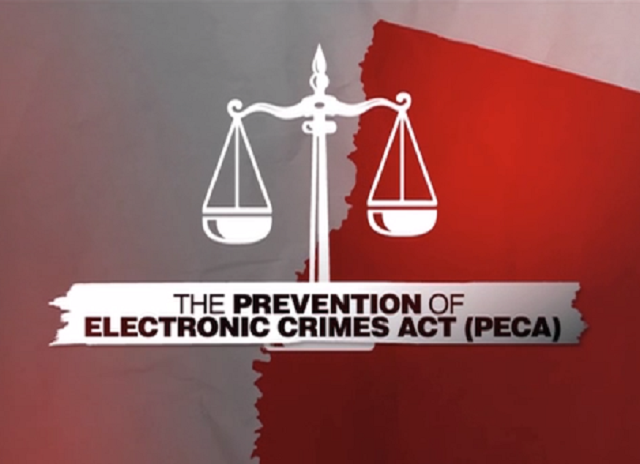 The Islamabad High Court (IHC) was told on Thursday that the Federal Investigation Agency (FIA) will ensure that there are no more arrests under the Prevention Amendment Act Order of Electronic Crimes (PECA) until a report on the matter is submitted to court.

During the hearing of the motions against the PECA order, Chief Justice Athar Minallah noted that if defamation were criminalized, all elected officials and vloggers would land in jail. The court ordered the Attorney General of Pakistan (AGP) to present his closing arguments on Monday.

The Chief Justice heard petitions from the Pakistan Broadcasters Association (PBA) and other journalists’ organizations including the Council of Pakistan Newspaper Editors (CPNE) and the Federal Union of Pakistan Journalists.

AGP Khalid Javed Khan told the court he had met with the prime minister about the PECA order and advised him that certain sections of the order would have to be withdrawn. He informed the court that in his opinion the current amending order was not viable.

Emphasizing that he represented the Federation and not a political party, the AGP said that when the order was implemented, it was discovered that the law could be misused. He added that there was a suggestion that no action should be taken until a commission was set up on the matter.

AGP Khan said the government would also take the PFUJ, CPNE and all other stakeholders on board. He advised the Chief Justice that there was a court order and that no cases would be proceeded under the amended order. He assured that he would not defend the case if his words were not followed through.

The Chief Justice noted that if defamation were part of the criminal law, it would not apply to public office holders. He also said making an arrest in a defamation case could not be justified. He called the AGP’s statement to the court on behalf of the government appropriate.

The chief judge told the court that the AGP had assured the FIA ​​and the federal government that no one would be affected. He added that all stakeholders should sit down with the Attorney General to find a solution.

The Chief Justice observed that parliament had made defamation a criminal offense under Section 20 of the Act and pointed out that the court could not suspend an act of parliament. He added that the AGP proposal was appropriate.

PFUJ lawyer Adil Aziz Qazi said about half of the order, the AGP itself said it would not defend it. He expressed his willingness to sit with the AGP. The Chief Justice said if all the parties sat down together, even the order could be withdrawn.

Lawyer Iman Mazari questioned why the government did not hold consultations before issuing an order, while lawyer Usman Warraich raised the issue of ongoing court cases under the PECA order.

The court ruled that the TV programs were outside the jurisdiction of PECA 20. The chief judge told the FIA ​​they arrested one person in one day and asked the director if the agency had done its analysis . He added that the case against media personality Mohsin Baig was a classic case of abuse of power.

Lawyer Azhar Siddique sought to give arguments in the case of MP Kanwal Shauzab. The Chief Justice told the lawyer that he was also a vlogger and someone could press charges against him. The lawyer replied that he was ready for it.

Shauzab told the court that she holds public office but also enjoys freedom of speech. She added that she was neither rich nor a bully. Referring to the allegations against her person, she asked if it was freedom of expression that she was accused of.

The Chief Justice told the Attorney General there was an elected official’s complaint and asked if it was founded. He added that public officials should be encouraged to tolerate criticism. The court then called for closing arguments in the case on Monday.

Should WordPress 6.0 remove the “Beta” tag from the site editor? – WP Tavern