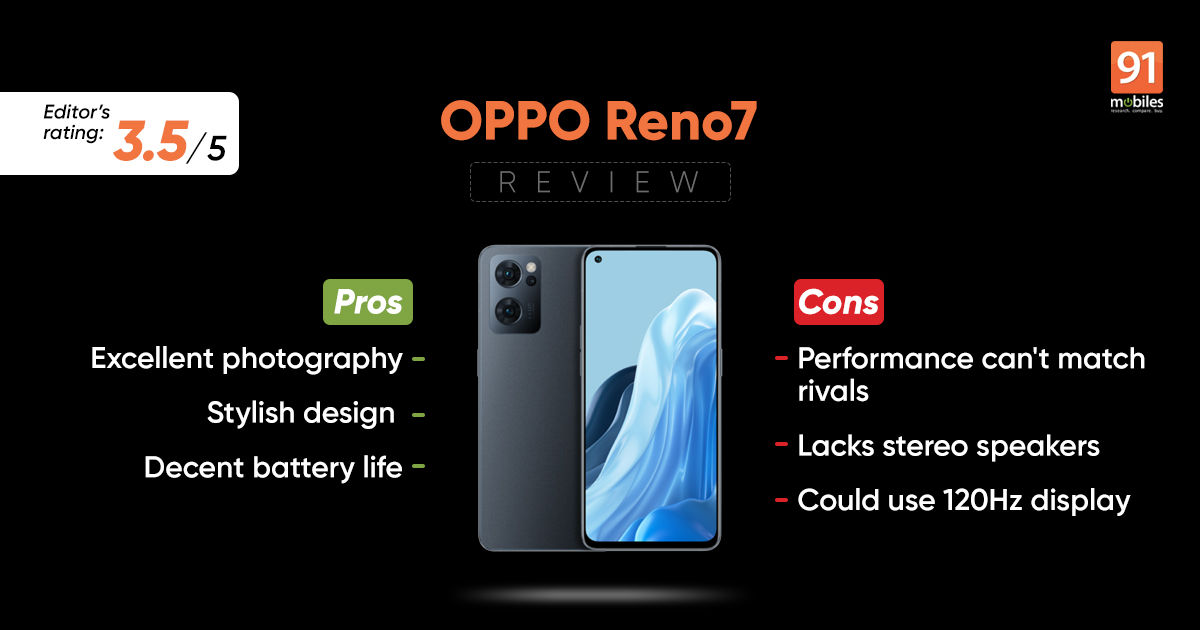 OPPO has just unveiled two new devices in its Reno series, which come in the form of the Reno7 and Reno7 Pro. The latter appears to be one of the most stylish devices in its category, but its price leaves something to be desired. Now I have the Reno7 with me, which also packs decent specs, making it worthy of a detailed look. Priced at Rs 28,999, the device competes with the recently launched Vivo V23 (review), as well as others like the iQOO 7 (review) and Moto Edge 20. It’s time to find out how the Reno7 behaves on a daily basis.

The OPPO Reno7 is a device with great cameras and decent battery life. Its design is excellent, as is its handling. However, for its price, performance does not match competing devices. The absence of stereo speakers and a 120Hz panel further accentuates this problem. Even so, the Reno7’s ability to provide useful features on its camera app to help social media enthusiasts could make it a popular choice among the community.

The Reno7 infuses a bit of the design language that its Pro sibling shows off, except for the flat edges which are now curved in this case. OPPO has kept the matte glass finish, but there’s a glossy look that picks up smudges and fingerprints. The phone is grippy with a light grip feel and slips easily into the pocket. At around 7.81mm, the Reno7 is slightly thicker than the 7 Pro but the difference is barely noticeable. At the bottom, the device has a USB C port with a speaker grill and a 3.5mm headphone jack which is absent on the older sibling of the device. The power button is located in a position that allows my thumb to reach it comfortably while the volume rockers on the other side are quite tactile in nature. I received the Startrails Blue version which has a slightly bluish tint to the back giving a prismatic effect which I really like. Finally, there’s a slightly raised triple-camera setup on the back. 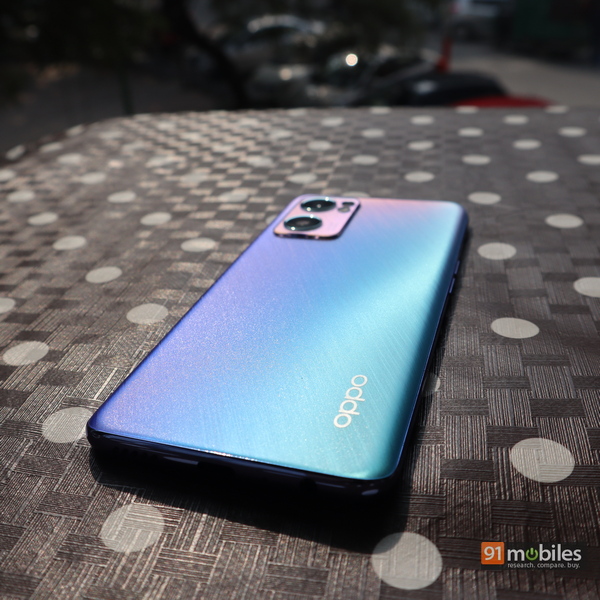 On the front, there’s a 6.4-inch AMOLED panel with FHD+ resolution and a narrow 20:9 aspect ratio. The bezels surrounding the screen are slightly thicker than most phones of this size. category, especially at the bottom. However, the viewing experience remains more or less flawless with excellent color and brightness levels. OPPO has provided a 90Hz refresh rate panel on the Reno7 which does not stutter until it encounters an app that only supports 60Hz. The device does not have HDR10+ certification but there is WideVine L1 for HD content on Netflix and Amazon Prime. The Reno7 provides a color calibration profile that suits the eyes of various users. On the top, there’s the punch hole housing the selfie shooter which doesn’t distract at all. Again, like the Pro, the lack of a 120Hz panel is a little disappointing, but other than that the visual quality offered by the display is quite pleasing. 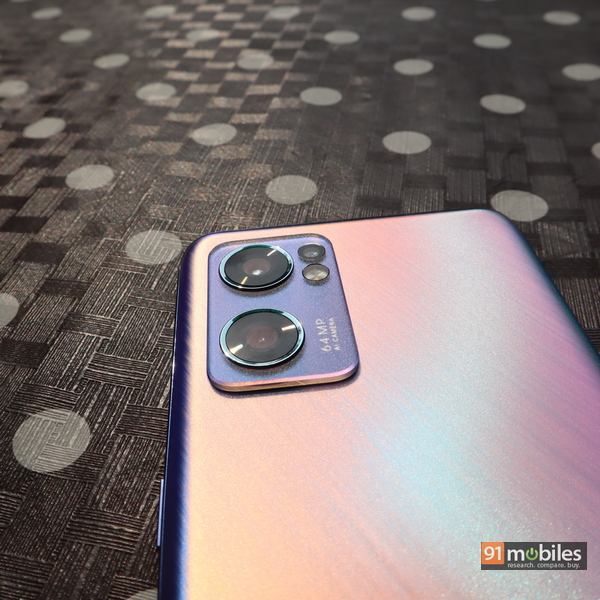 The cameras are the cornerstone of the Reno7’s overall smartphone experience. The 64MP main camera is the headliner while 8MP and 2MP ultra-wide macro shooters complete the triple-camera package. As a daylight photography machine, the Reno7 does little wrong. Photos are extremely sharp and rich in detail with a slight touch of contrast. The dynamic range accentuates the blues of the sky and the silver outlines of the clouds. Exposure is handled quite well and details are clearly visible even after zooming in on the photo. Focus speeds are fast and shutter speeds actually seem better than the Reno7 Pro. The ultra-wide lens didn’t hide detail along the edges, even though focus was firmly locked on the center and color temperatures didn’t vary from what the main shooter offered. There’s also the macro sensor, which, for lack of a better word, is rudimentary in nature and takes passable photos only in the strongest lighting conditions. Apart from that, the Reno7 can also use sub-pixel interpolation to produce a 108MP image from its 64MP sensor.

The phone has some notable camera implementations that heavy social media users and vloggers will find useful. In portrait mode, you have the ability to change the depth of field and the amount of blur with up to 25 adjustable aperture values. These effects are also translated to the video mode with an option to change the bokeh style. I also tried the AI ​​Highlight feature which gave the video a rather saturated look which wasn’t to my liking but would surely look great on your Instagram feed. 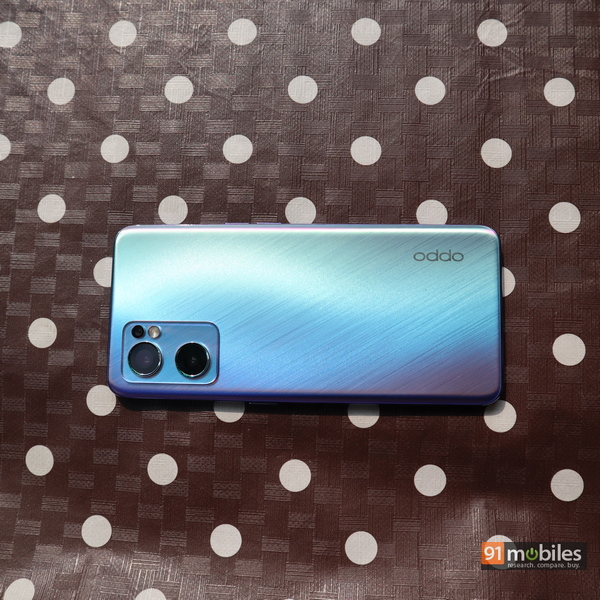 As for low-light photography, the Reno7 nails it quite effectively and without fail. Most of my sample shots have some form of street lighting or billboards illuminating the scene and the Reno7 delivers detailed, color-accurate images quite easily. The dedicated night mode also works more efficiently for some reason than on the Pro version of the device. Exposure levels are kept under control, giving night shots a realistic touch. Finally, there is the selfie camera with 32MP sensor. Hot selfies using this issue have issues with skin tones and excessive sharpness. The front portrait mode, however, does a good job of separating the subject from the background. 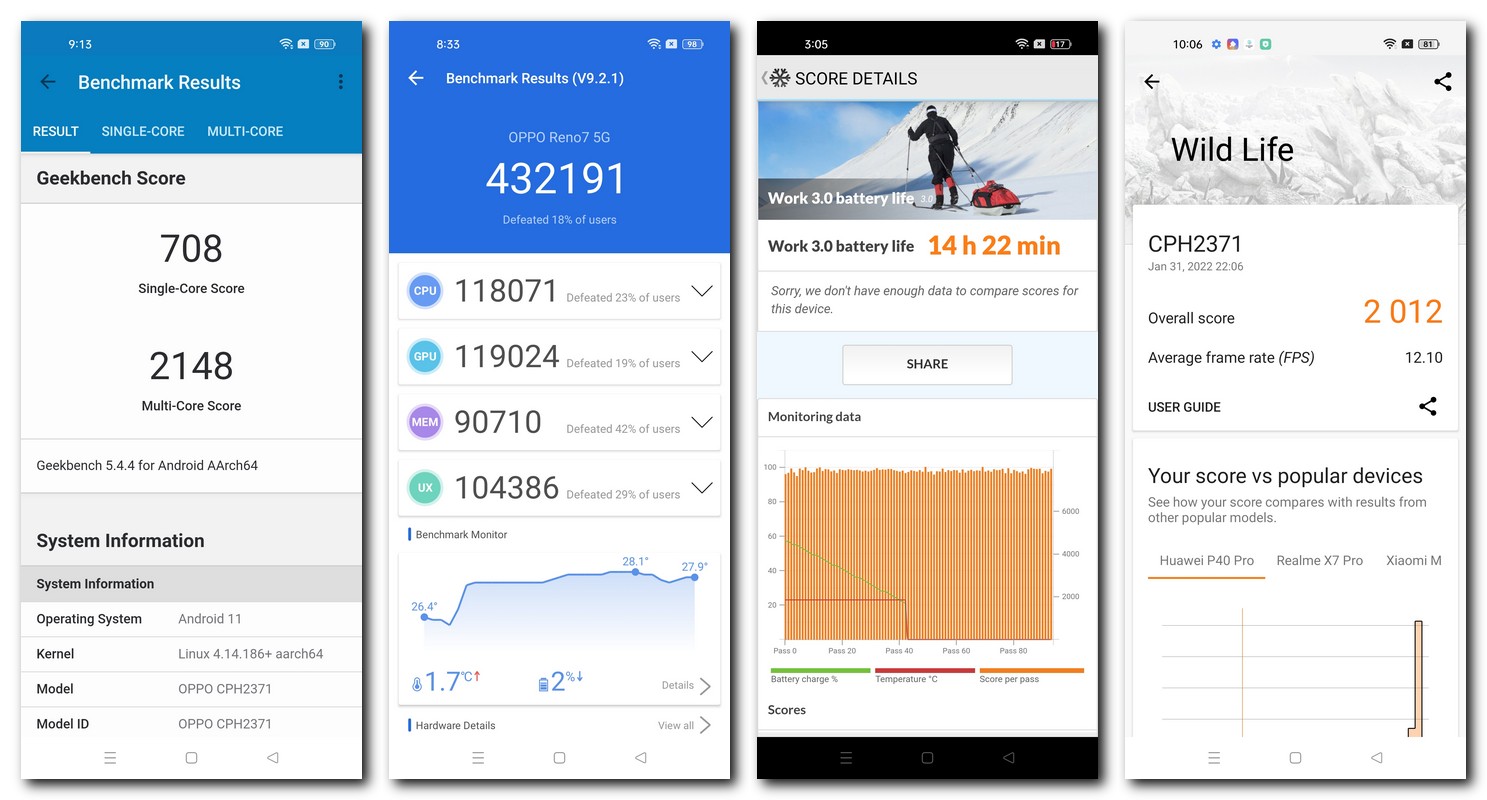 Moving on to the performance part of the device, the calculation of numbers is handled by the Dimensity 900 chipset. While there is nothing wrong with the processing capabilities of the SoC, it does not hold up too well against devices competitors in this particular price range. The usual round of synthetic benchmarks returned results I’ve seen on other Dimensity 900 powered phones. On Antutu the device gave an overall score of 432,191 while the Geekbench 5 multi-core result was 2 418. For comparison purposes, the Mi 11X (test), packed in a Snapdragon 870 chipset and costing less than the Reno7, scores 664,538 and 3,301 on these benchmarks. Daily use of the smartphone is lag-free and the 8GB of LPDDR4X RAM with an additional 3GB of virtual RAM allows a number of apps to continue running in the background. Tasks such as video editing and intensive mobile gaming put some strain on the Reno7 and the device can only achieve 45 fps on BMI. 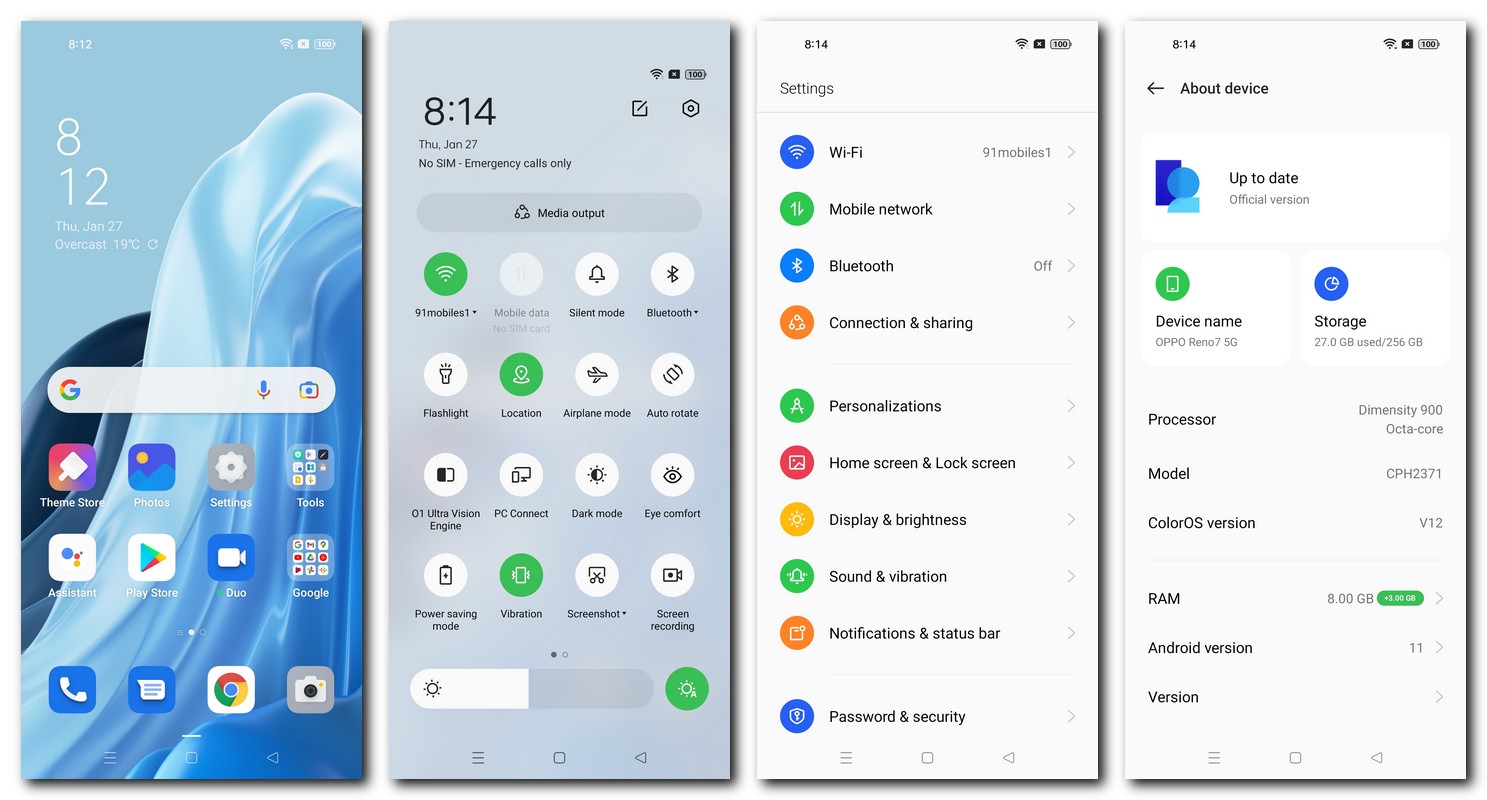 There’s a single speaker present at the bottom with shallow sound quality, and the lack of stereo output is a disappointment. An optical type fingerprint sensor is used on the Reno7 and its authentication speeds are fast. 5G capabilities on the device exist but there is no telecommunications infrastructure in place to use it. 4G LTE speeds on Jio’s Noida network worked as well as expected and without a hitch. Speaking of software, ColorOS 12 based on Android 11 runs on the device and it’s a little disappointing that the phone doesn’t come with Android 12 out of the box. It’s worth mentioning that ColorOS has become quite user-friendly, with themed customizations, sparse icons, and little bloatware.

On the battery side, the device comes with a 4,500mAh cell that has 65W fast charging capabilities. remained up to 30% autonomy. The average screen time was around 5-6 hours which is pretty decent on an Android phone with the given battery capacity. In PCMark’s Battery 3.0 test, the phone returned a score of 14 hours and 22 minutes, which is pretty good. OPPO’s 65W charging technology easily recharges the cell in about 35 minutes.

The OPPO Reno7 5G competes in a space that has seen excellent performance-to-cost innovation. The Dimensity 900, while a decent chipset in a mid-range smartphone, doesn’t stand out at Rs 28,999. For power users who focus on mobile gaming, there are several other options from iQOO, OnePlus, and Xiaomi in this price range that might suit their needs better. That said, OPPO has integrated a number of camera-specific modes into the Reno7 5G that are meant to help those involved in social media content creation and vlogging in general. With its sleek design, the device is sure to turn a few heads too.