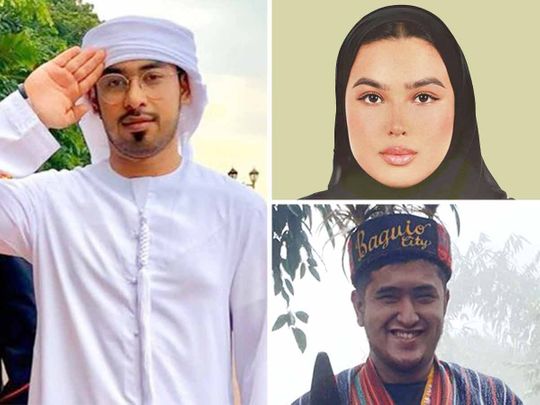 Video: Meet the Half-Filipino, Half-Arab Youth in the UAE

Dubai: Dressed in his neatly pressed kandura (Arab attire), Ali Nasser Alkaabi took a photo in front of the monument to Philippine national hero Dr. Jose Rizal. He also rode a horse-drawn calesa and rode around Luneta, where he posed between two Filipino honor guards.

For Alkaabi, a popular content creator in the United Arab Emirates with 1 million followers combined on Facebook and TikTok, he wasn’t doing stunts to update his social media. It was his way of showcasing his Filipino heritage.

Alkaabi’s mother (Ilyn Carpentiro Enoc) is a Filipina, originally from Davao del Sur in the southern Philippines, and her father (Nasser Mohammed Alkaabi), who died three years ago, was an Emirati from Al Ain.

“I wore a kandura in Luneta because I wanted to proudly show my lineage – I’m half Filipino half Emirati,” Alkaabi, who is in his 20s, told Gulf News, adding, “Filming took place two years ago. and it’s good to remember this moment as the Philippines celebrates its 124th Independence Day on Sunday.

Luneta, officially known as Rizal Park, is a historic urban park in Manila, the capital of the Philippines. Rizal was executed in the same area and this sparked the Philippine Revolution of 1896 against Spanish colonizers – which led to Filipinos declaring their independence from Spain on June 12, 1898 and the country became the first republican nation in Asia.

For Filipinos, Luneta is a symbolic focal point to exhibit his patriotism, and for Alkaabi – him wearing a kandura – was his way of showing how his personality was cultivated by two cultures.

He said: “In the United Arab Emirates, there are many residents and nationals whose parents are of different races. And since we are celebrating Philippine Independence Day, it is good to share how we are preserving our Filipino heritage. »

Born in the UAE

Alkaabi said it was difficult to constantly move around. “I was already used to a place, then I had to move and make adjustments again,” he said.

But on the bright side, he always had a fling. “I learned to play and enjoy traditional games in the UAE and the Philippines, such as taguan, tumbang preso, siyato, etc. I also experienced taking a bath in the rain” , said Al Kaabi.

“I also enjoyed Filipino cuisine – ginisang monggo with fried fish – and Emirati dishes. I was really exposed to both cultures and could speak four languages ​​including Arabic, Tagalog, Bisaya and English,” he added.

He explained, “I kind of acted as a bridge between Emiratis and Filipinos. I used social media to show my Emirati friends Filipino culture, especially their passion for music; and I explain to my Filipino friends in a light-hearted way the Emirati traits and traditions.

“I bring comic relief to daily life, but I also highlight and educate people how much fun it is to become a Filipino-Emirati,” added Alkaabi, who posted a video of him and his friends to Kandura carpooling karaoke singing “Imahe” by Filipino. alternative rock and pop band Magnus Haven which has gained thousands of likes, comments and shares.

Another proud Filipina-Emirati is Alia Habib, 23, whose way of showing she’s Filipina is to use “po at opo” when talking to her elders. ‘Po at opo’ are words that mean yes in English. Filipinos use them to show respect when talking to elders or someone they respect.

Alia said that this trait was passed down to her from the family on her mother’s side who raised her from childhood. “Although I was born and raised in Dubai, I grew up in a Tagalog-speaking environment,” she said.

“I was also taught to be respectful to elders and learned from my mother to be thrifty and budget conscious,” added Alia, whose Filipina mother is from Cavite, a province in the Philippines.

Alia, who lives with her family in Al Barsha, Dubai, is currently studying Forensic Science at Amity University. She said, “I am always proud to be Filipino and always show my Emirati friends Filipino dishes like chicken adobo, beef bulalo and sinigang na hipon. [shrimp] – which is my own comfort food.

She also loves music and the arts – and one of the main signs that she is Filipino is her passion and familiarity with karaoke singing.

Omar Sami Perdido Elkatouri, 25, whose mother is Filipino and father Palestinian, said one thing that would make Filipinos stand out is that “we always smile”.

However, it was not his mother who taught Elkatouri how to become a Filipino, but his Palestinian father.

He said, “It was my father who instilled Filipino heritage in me. My mother [Imelda, a pharmacist from Ilocos Norte] passed away when I was about two years old. My father [Sami, a school teacher from Palestine] keeps me in touch with my mother’s family and culture.

“My father enrolled me in the Far Eastern Private School, a Filipino school in Sharjah. And he kept encouraging me to learn Tagalog and told me all the stories of our family in the Philippines. My dad always had karaoke nights at home and made sure we didn’t miss the community atmosphere we have as Filipinos,” he added.

Elkatouri is the youngest of three siblings. He was born and raised in the United Arab Emirates and occasionally travels to the Philippines. His father also passed away a few years ago, but he said he was always grateful that his father instilled the Filipino spirit in him – and one of them is still upbeat, with an ever-ready smile on his face. face.

“My love for food and sharing food as well as family orientation are also the other traits that I retain as a Filipino,” added Elkatouri, who apart from being a freelance photographer and videographer, has a talent for in music. He plays drums and his favorite bands are Guns N’ Roses and Filipino rock band Kamikazee, as well as pop band Orange and Lemons.

In time for Philippine Independence Day, Elkatouri said he was proud of Philippine history. He knows the Filipino heroes who fought with compassion, courage and patriotism. He also remembers how his father proudly displayed the Filipino and Palestinian flags on their family car. These days, it always makes him smile whenever he says he’s Filipino.